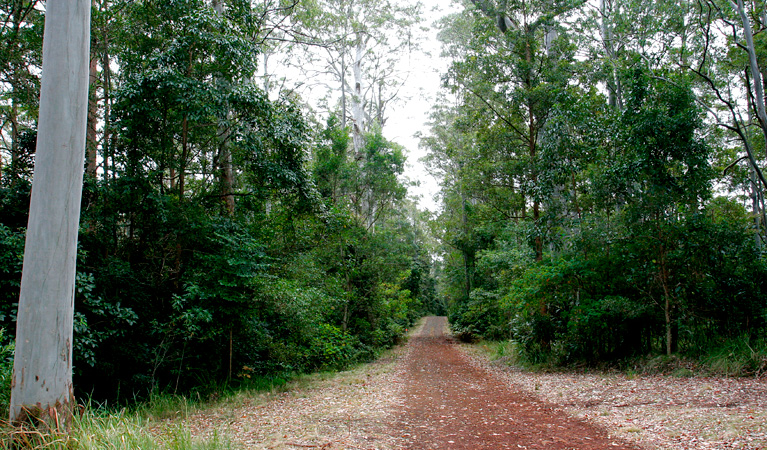 From Casino the southern end of the park is reached by leaving the Bruxner Highway at Cambridge Plateau Forest Drive, 200 metres east of the Mallanganee Tick Gate.

From Kyogle the northern part of the park can be reached by taking the Afterlee Road at Toonumbar Dam and the Oaky Creek Road.

The Cambridge Plateau Rest Area is 12 kilometres along Cambridge Plateau Forest Drive from the Bruxner Highway. Facilities include picnic tables, barbeques, toilets, some tank water, and a lookout with easterly vistas tMount Warning and beyond.

Richmond Range National Park encompasses the rainforests of Cambridge Plateau, which are included on the World Heritage List as part of the ‘Central Eastern Rainforest Reserves of Australia’. This chain of reserves protects most of the remaining areas of rainforest in south east Queensland and north east New South Wales.

These internationally significant rainforests have an outstanding diversity of native plants and animals including many rare and threatened species. The remarkable natural values of these areas make them worthy of World Heritage recognition.

Richmond Range is a remnant of the once giant Focal Peak volcanthought thave been active some 24 million years ago. Focal Peak in Queensland is the remaining central vent, ringed by a series of smaller vents and landforms across the NSW/Queensland border.

The Focal Peak area, with its rich and variable soils and high rainfall, sustains some of the world’s best rainforest remnants.

Subtropical and dry rainforests cover about 40% of the park and contain over 400 species of flowering plants, dominated by black and white booyongs, strangler and Moreton Bay figs, giant stinging trees, and hoop pines. Surrounding the rainforests is a buffer of tall moist sclerophyll forests dominated by the brush box, Sydney blue gum and flooded gum. Large areas of dry sclerophyll forest are dominated by the Richmond Range spotted gum (Corymbia variegata).

The variety of forest habitats provide a refuge for many threatened animals including the spotted-tailed quoll, yellow-bellied and squirrel gliders, brush-tailed phascogale, and Albert’s lyrebird. The mammal fauna of the Richmond Range has been described as the richest in species numbers and diversity ever reported in any area of comparable size in Australia. The park is alshome tmore than 100 species of birds.