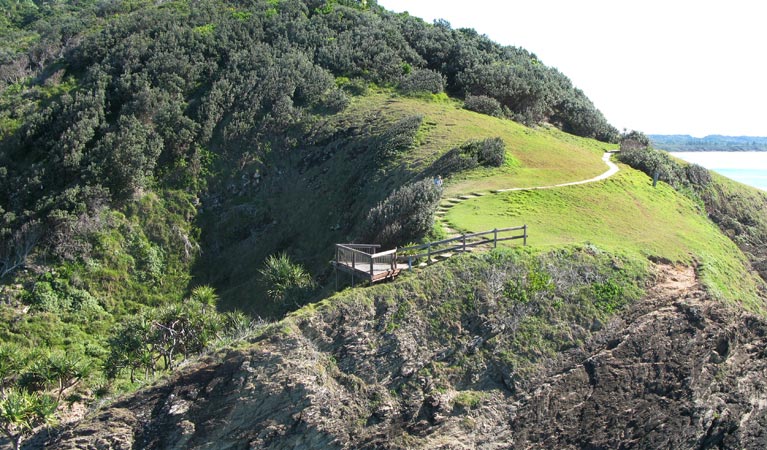 The reserve was dedicated to ensure the preservation of an unusual occurrence of coastal subtropical rainforest called littoral rainforest. The prominent headlands have provided protection and the forest has devised growth methods to deal with exposed conditions and salt laden winds.

Originally the country between Byron Bay and Lismore contained the largest area of tall subtropical rainforest in Australia, known simply as the ‘Big Scrub’. This 75,000 ha forest was almost totally destroyed for agriculture in the latter part of the 19th century. Today only isolated remnants totalling less than 300 ha remain – some 0.4% of the original area.

Although once separated from the original ‘Big Scrub’ by several kilometres of sclerophyll forest and wetland, the coastal subtropical rainforest of Broken Head contains many tree species – such as white booyong, rosewood, red bean, red carabeen and yellow carabeen – which once occurred in the ‘Big Scrub’. It also contains the southernmost occurrence of the smooth seeded kurrajong, and one of the few known examples of stinking cryptocarya in NSW. The moist sheltered gullies harbour bangalow palms and soft pink-leaved maidens blush. Hardy brush box, native elm and tuckeroo tower on the ridge tops above the low understorey of palm-like burrawangs.

Access is via the Seven Mile Beach road, a scenic gravel road which heads southward from Broken Head Village. A signposted walking track through the rainforest leads to Kings Beach from a parking area on this road. This walk some 350 m in length passes through some of the best examples of coastal rainforest in the reserve, terminating at the outstandingly beautiful and peaceful surroundings of a small beach haven.

Funds for the initial construction of this walking track in 1989 were provided, by special bequest, from the estate of the late Dudley Cook of the Sydney area. A keen fisherman and nature lover, Mr. Cook’s wish was to provide access, by means of facilities such as this, so that more people could experience the beauty of natural areas.

Fishing is a popular activity at Broken Head, with mulloway, bream and tailor caught in season, as well as a variety of rock fish.

The spectacular scenery of Broken Head Nature Reserve is often highlighted by the unexpected combination of scrub and sea birds. White breasted sea eagles and brahminy kites soar along the cliffs, occasionally plunging into the sea to snatch up a fish.

Within the rainforest gently cooing green-winged pigeons and rose-crowned pigeons feed on the rich supply of fruit and berries. In the summer months the mournful call of the koel rings eerily in the gullies and the loud whip crack of the eastern whipbird is unmistakable. Both male and female whipbirds often call together producing a simultaneous sound resembling only one performer. Many birds can be encountered if you walk quietly through the forest.

The Dreamtime story of the rocks tell of two sisters bathing off the headland. One became caught in a strong current, the other sister swam to save her but was also swept away. The girls were drowned and became the rocks that carry their name. Bundjalung people told this story as a warning to their children, for if they swam there, they too might drown and turn to stone.These are the prominent rock outcrops visible from both Two Sisters Walking Track and Kings Beach Walking track. They are an important bird resting and roosting area as well as being a part of local aboriginal mythology.

Camping and day use facilities are provided by Byron Shire Council at the Broken Head Caravan Park. Resort facilities are available at the nearby town of Byron Bay.

Camping and the lighting of fires are not permitted in the reserve or on any of the beaches.