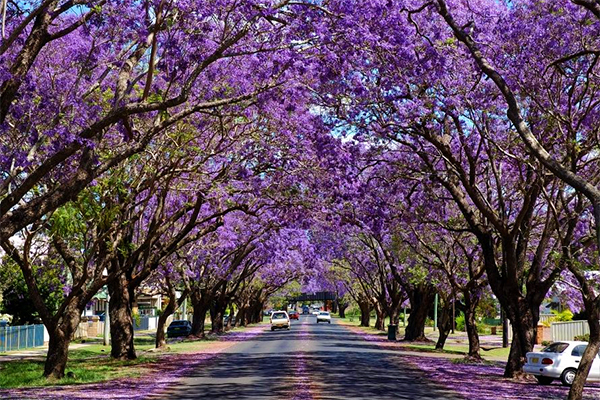 The beautiful purple-flowering jacaranda trees are an integral part of the image of Grafton, and their flowering is celebrated in the famous annual Jacaranda Festival. Combining the arts, sport, ceremony and fun, the festival, which originated in 1935 is Australia’s longest running floral festival and showcases a cross-section of this city’s culture and community.

Actually, the importance of the arboreal attractions of the city were under consideration as long ago as 1866, when the Grafton Council resolved to consider by-laws for the planting and preserving of trees and shrubs in the streets and recreation grounds. Historically, this might be have a certain irony, because the city, like many other settlements in the area, was first opened up to white settlement by the cedar-getters.

It was an escaped convict, Richard Craig, who ‘discovered’ the district in 1831. With the wealth of ‘red gold’ cedar just waiting for exploitation, he was given a pardon and one hundred pounds to bring a party of cedar-getters on the cutter ‘Prince George” to the region. Word of such wealth to be had did not take long to spread and one of the arrivals was pioneer John Small on the ‘Susan’ in 1838, and he first occupied land on Woodford Island. ‘The Settlement’ (as the embryonic Grafton was then imaginatively named) was established shortly after. By 1851, the first sale of town blocks was taking place and Governor Fitzroy officially named the town ‘Grafton’, after his grandfather, the Duke of Grafton.

By 1885 it had developed sufficiently to be proclaimed a city, and there are still many beautiful heritage buildings in Grafton which have been classified by the National Trust. Along with many private houses, the large Christ Church Cathedral and the notorious Grafton Jail are both included in the listings. The Cathedral, built in 1884, was designed by John Horbury Hunt along Gothic lines, with towering arches and a spacious interior and is open daily. Historic homesteads have also been preserved, and ‘Shaeffer House’, which was purchased and restored by council, now displays the many collections of the Clarence River Historical Society.

‘Prentice House’ (1880) is now the Regional Art Gallery, and rated as one of the outstanding provincial galleries in Australia, and open to the public six days a week. The gallery hosts many exhibitions, which change every five to six weeks and vary from contemporary to traditional and range across all media, and the gallery’s $10,000 Jacaranda Acquisitive Drawing Award is recognised nationally. Leading Australian contemporary artist Ken Done, maintains his strong links with the ClarenceValley as one of the gallery’s patrons. The gallery also hosts a number of functions and incorporates a courtyard cafe.

Grafton also has numerous art and craft groups, including fine arts, quilting, woodwork, embroidery, lapidary, folk art, doll-making, photography, ceramics and many more. There is a wide range of commercial galleries in the region, along with art and craft outlets and specialist supply shops. The historic river village of Ulmarra, just 12 km north of Grafton, also has several outstanding galleries and craft shops, plus studios where the public can see the artists at work.

The mighty Clarence River, which brought in the first white settlers, still plays an important role in the city’s life, though no longer the main ‘highway.’ Boating and watersports as well as fishing, both commercial and recreational, are a major attraction, with holidaymakers also enjoying actually living on the water in houseboats or sightseeing on hired cruisers. With many dozens of islands and quaint river towns, the Clarence is fascinating to tour by water. River cruises are also available at the river mouth. Passenger ferry services to more out of the way destinations are also an interesting way to cross the Clarence, and a relic of the time several decades ago before all of the highway’s bridges were complete, when queuing for the ferry during peak holiday travel times was a regular occurrence.

Water-ski enthusiasts shouldn’t miss the annual Bridge to Bridge Ski Race, which is held every October long weekend, and the Bridge to Bridge Sailing Classic is held every November. If you feel like trying it out, the Seelands Ski Resort nearby is the place to learn or to display your expertise, whether it’s for 15 minutes or a holiday stay. Whitewater wizards can travel to some of the best wild water canoe country in Australia, just a drive to the south at Nymboida Canoe Centre. There are regular state, national and international competitions, and spectators can sit right beside the action. With rapids up to and including Grade III, plus a learners pond for ducklings not yet sure of their paddling skills, plus many other outdoor activities, there is something for everyone to enjoy.

Fishing at Grafton can be interesting for amateurs, as due to the changing levels of freshwater (depending on rainfall), either salt or freshwater fish can be caught at different times of the year. The upper reaches of the river and its tributaries have a range of good freshwater table fish, and tours are available.

Racing is popular at Grafton, and the track provides amenities equal to most metropolitan tracks. With thirty meetings held each year, the highlight is the July Racing Carnival, the richest country carnival in Australia. The Grafton Cup is the culmination of the carnival, which draws many nationally rated jockeys and horses competing for the richest race in rural Australia. If you prefer to drive a horse yourself, there are farm holidays with horseback riding available in the region, along with horseback tours through some of the beautiful bush areas.

Many other sports are well catered for, with four licensed bowling clubs, a 10 pin bowls centre, and an 18 hole championship golf course at South Grafton. There is also a nine-hole course within the racecourse and a golf driving range at Rushforth Road. Squash players have a choice of courts, and the main tennis complex is in Prince Street. Visitors looking for something more unusual can try indoor rock climbing at the South Grafton gym, where there is also an indoor heated pool. Car racing enthusiasts can attend Grafton Speedway meetings at the showground, or one of the regular meetings for cars, go-carts and bucket-bikes on the hillclimb track at Mountainview. If un-powered flight is your thing, head west on a Sunday (weather permitting) to Eatonsville and glide with the local club.

And for all those who are grateful for the foresight of the Council well over a century ago, the results are on display all over Grafton, with more than 6,500 trees providing shade and 24 carefully maintained, beautiful parks. Some of the most popular parks are the Market Square Park, which is adjacent the Clock Tower in Prince Street, a great spot for lunch and the focus of many Jacaranda Activities. Just down the river end of Prince Street is the Memorial Park and Boulevarde, which has shade seating and tables, while the See Park Arboretum in Pound Street is ideal for families, with a children’s playground and barbecues and shelter sheds, as well as beautiful ponds and suspension bridges. The South Grafton Boulevarde on the river bank has large shady trees picnic facilities and barbecues, while the Alex Bell Reserve nearby has a children’s playground as well as barbecue facilities.

Susan Island, in the Clarence and just opposite Grafton’s main street and Memorial Park is the place to go completely batty, with the rainforest-covered northern end housing the largest fruit bat colony in the southern hemisphere. Dusk is the perfect time to see their cute, spiky little silhouettes as they head off into the night in search of food, and likewise the time to avoid if you are not won over by these amazing, umbrella-winged creatures. During the day, the island is a fascinating place to visit, with barbecue and picnic facilities for family fun and the rainforest and island to explore for children of all ages. Access is by private boat or on the new Clarence Islander. Houseboats and larger craft can tie up at the wharf on the eastern side.

Grafton is also a great base for explorations of the many national parks in the region, and those within a one-hour drive are Yuraygir and Bundjalung on the coast and the World Heritage-listed Washpool and Gibraltar Range parks to the west. The Solitary Islands Marine Park off the coast from Coffs Harbour north to the Sandon River, and marks the zone where warm tropical currents meet cool currents from the south, creating an incredible diversity of marine life for SCUBA divers and snorkellers to explore. Four wheel drivers can tour the more rugged areas of the region, and you can also join 4WD tours which cover areas from the Clarence River Gorge to Mount Camelback and beach and forestry drives.

If all this activity leaves you in need of retail therapy, there are plenty of shopping opportunities in Grafton, with major shopping centres plus many specialty shops. Many of the rural towns and villages around Grafton also have fascinating antique and craft shops.