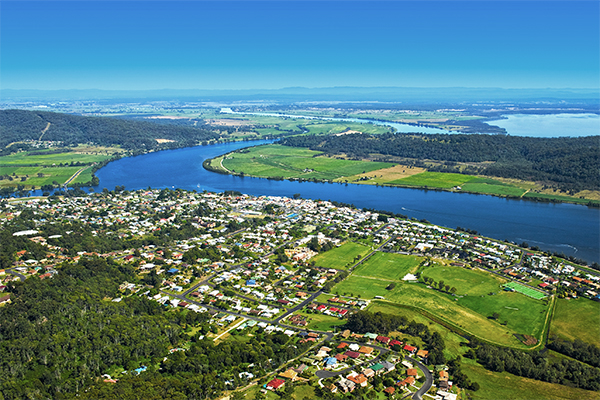 The tartan connection is hard to miss in Maclean (“The Scottish Town in Australia”) with many street signs carrying a Gaelic translation and promotion of its heritage through the annual Easter Highland gathering. Australia’s oldest Free Presbyterian Church still carries on the services to the descendents of the early settlers, and there is a large Scottish cairn constructed from rocks from around Australia and Scotland in the Herb Stanford Memorial Park, overlooking the river in Taloumbi Street.

But the more tropical crop of sugar cane is another important part of Maclean’s heritage and economy, being the southern gateway to the industry which grows as far north as Cairns. The broad Clarence river also maintains the prawn trawling fleet which works from the river mouth to the Ulmarra ferry, with fish netted over the 90km tidal length of the river. Amateur anglers also enjoy the many river stretches to chose from ,a nd boats can be launched near the Police Station and at the Harwood Bridge. Houseboats are a great way to enjoy the river and take in the scenery, and there is also a wide range of other types of accommodation, from caravan parks to motels, hotels and upmarket bed and breakfast establishments in this historic riverside town. Being close to national parks, beaches and Grafton, Maclean is a good holiday base.

The tourist information centre at the southern turn-off to Maclean showcases the entire area and includes a restaurant and a gallery of arts and crafts.