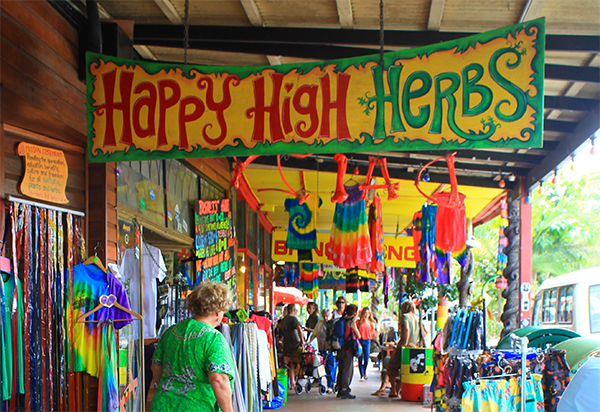 Until early 1973, Nimbin was just another small dairying community struggling to survive the rural changes in the region. The nationally-promoted Aquarius Festival changed all that, and the influx of starry-eyed visitors from around Australia, intent on exploring new ‘alternative’ ways of living, made Nimbin into the destination of dreams. No matter that many of the region’s own children were heartily sick of self-sufficiency as a way of surviving on minimal income, the new arrivals who had ‘dropped out’ quickly replaced those escapees who looked forward to ‘dropping in’ to Sydney and becoming securely middle-class!

New arrivals (charmingly documented on films of the era) wonder at the friendliness of the place, and the beauty of the countryside; yet to realise that farming can incorporate both back-break and heartbreak, and small communities also lack privacy and anonymity.

Three decades on, the first psychodelic paint-jobs of the town’s old shops have been repainted in all their original glory, and the town is a destination for backpackers and tourists from all over the world. With street theatre at times resembling the middle ages set in a tropical zone, the shopping strip is a colourful and sometimes challenging magical mystery tour. Shops range from the regular through to arts, crafts, gifts, galleries, wholefoods and organics and there are several cafes and restaurants. The eccentric Nimbin Museum is not to be missed, either.

Surrounded by world heritage National Parks and with the dramatic Nimbin Rocks just outside the town, Nimbin is also an important Bundjalung site, with the ranges rich with stories going back to the Dreamtime. It is the resting place of Warrajum, the Rainbow Serpent, and also a place of healing and initiation, which may be significant to those seekers and new settlers for whom the dream has not provided the hoped-for Utopia. Nimbin, however, still draws people with different dreams.