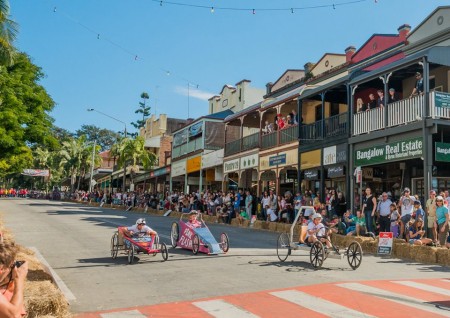 Back in the late 19th century, the little village of Bangalow was almost at the centre of one of the most productive areas in the state for the dairying industry. With historic shopfronts lining both sides of the main street, the village provided most of the essential services for the locals and the surrounding farms for many decades. But as the motor car took over from the horse and sulky, distances shrank, and shoppers drove further afield. With the main street then part of the increasingly busy highway, and the dairying industry in decline, Bangalow almost went the way of many other rural outposts.

Salvation arrived in the form of the ‘alternative society’ of the early seventies, and as city refugees moved in to enjoy the country lifestyle and low rents and property prices, Bangalow developed a new persona. Funky restaurants, cafes and craft shops and galleries opened and the famous Bangalow markets began.

The heritage shopfronts which had survived without the ugly renovations or demolitions visited on the more successful towns were repainted in stylish colours and the village became a leisure destination, a pretty place to enjoy a coffee or a meal or peruse a gallery or seek an antique. Being only ten minutes from Byron Bay, it’s a popular side-trip for tourists and a hideout for Byron locals in the busy times.

The by-pass which took the traffic away from the town was celebrated with a Billy-Cart Derby which was so successful that it is held every year, along with The Christmas Eve carnival and the historic Bangalow Show.