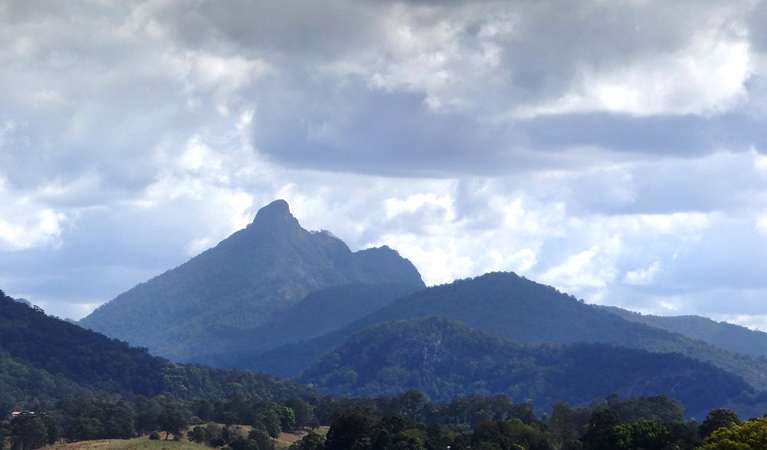 Mount Warning remains significant to Aboriginal people, providing a traditional mythology that extends back to the dreamtime. Called ‘Wollumbin,’ meaning ‘fighting chief of the mountains,’ the Aboriginal people believed that lightning and thunder observed on the mountain were warring warriors and that landslides were wounds obtained in battle.

The mountain was named by Captain Cook to warn future mariners of the offshore reefs he encountered in May 1770.

Reserved for public recreation in 1928, Mount Warning was dedicated as a national park in 1966. Inclusion in the UNESCO World Heritage Listings in 1986, along with other NSW rainforest parks, ensures its protection for future generations.

The fertile volcanic soils, high humidity and rainfall of Mount Warning provided sanctuary from advancing aridity. The ancient forests that occur here are a window into the past. Among the multitude of tree species are giant stinging trees, figs, booyongs, carabeens, brush box, and flame trees. Many threatened plant species are found here.

A variety of birds, mammals and reptiles may be seen by the observant walker in Mount Warning National Park. Birds are abundant, over 100 species have been recorded, including the rare and endangered rufous scrub-bird, wompoo pigeon, marbled frogmouth, and Albert’s lyrebird.

Winding upwards from the Breakfast Creek parking area is the Mount Warning Summit Track, which passes through a variety of vegetation communities. Subtropical and temperate rainforest, wet sclerophyll forest and heath shrubland are all encountered on your journey upward. After a final rock scramble the track emerges to 360 degree views reaching every distant horizon.

Evident from this vantage point is the enormous eroded bowl of the caldera landform. Twenty million years ago the height of the volcano was twice the present height of Mount Warning. This volcano was formed by massive outpourings of lava, layer after layer, over a landscape that stretched from Mt. Tamborine in the north to Lismore in the south. Westward it extended to Kyogle and its eastern remnants occur as reefs at Point Danger.

The height of the volcano alone was sufficient to trap moisture laden air from the coast. Over the millennium the myriad of small streams produced by this trapped moisture, carved out this unique and curious landform. Harder rocks resisted this erosion such as the rhyolite cliffs of the caldera rim and the rock composition of the central chamber. These stand as stark testimony of the grandeur that once was.

Track condition: Steep and rocky in parts. Winter warning: Not advisable to undertake the walk after 2 pm in winter, as darkness on the return can lead to people becoming lost.

A shorter walk catering for the less energetic, the Lyrebird Track crosses Breakfast Creek before winding some 200 m through palm forest to a platform set amongst the lush subtropical rainforest.

This World Heritage rainforest park (2 210 ha), located in far north-eastern NSW, is reached by leaving the Pacific Highway at Murwillumbah and following the Kyogle road west for 12 km. Turn onto the Mount Warning Road and travel 5 km to the Korrumbyn Creek Picnic Area at the park entrance. Proceed another 1.5 km along the road to the Breakfast Creek parking area at the base of the mountain.