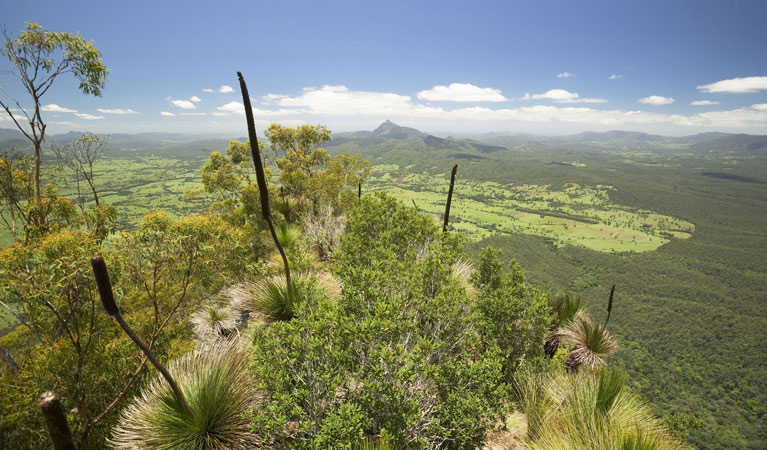 Border Ranges National Park has been included on the World Heritage list as part of the Central Eastern Rainforest Reserves (Australia) along with other major rainforest stands in north-east NSW and south-east Queensland. World Heritage properties, places of outstanding value to the world, may be natural wonders or monuments and landscapes of human culture.

The listing of the Central Eastern Rainforest Reserves (Australia) means that Australia has an obligation to protect the values of this subtropical rainforest, including the plants and animals that are endemic to the area.

More than three-quarters of Border Ranges National Park is managed as wilderness. As declared wilderness, these areas are provided protection for their natural features and access is by foot only.

Since the last ice age, Bundjalung Aboriginal people have roamed the northern rivers. Border Ranges is the traditional home of the Galibal language group of the Bundjalung Aboriginal people. The main clan of this group was the Walunumgmira, who were based at Walung, now known as The Risk. These forests offered all the necessities of life to the Aboriginal people. There was plentiful food to be had & pademelons, possums and birds and the forests yielded resources such as bangalow palm fronds as water containers and fibres of the stinging tree to weave nets.

The life of the local Aboriginal people changed forever with the arrival of new settlers from Europe. Europeans made a big impact on the area after the arrival of the cedar-getters in 1842 and, later, farmers and graziers. The timber-getters hired the local Walunumgmira people to spot the red gold or cedar trees in the forest and used them to obtain the rich sources of food and resources from the forest. Vast areas of bush and scrub were cleared and fenced off, diminishing the resources of Aboriginal people. By 1870, the life of the Walunumgmira had changed irreversibly and by 1900 the Aboriginal people were living in camps at Grevillia, Moore Park, The Risk, Grady’s Creek and Horseshoe Creek.

After the cedar and hoop pine stands on the Dorrigo Plateau had been logged, mill owners looked north to the Border Ranges. Hoop pine was the most sought after timber after cedar. Soon, almost every creek on the western side of the caldera had its own mill. At Long Creek, the timber camp was a village with a bush nurse, a blacksmith and a school for more than 30 children. The remains of the Long Creek Tramway can still be found within the park. This tramway was built by timber-getters to haul logs from the rainforest to Long Creek Mill. The logs were first hauled by horses along the track. Later, steam engines were introduced. The tramway was closed in 1947 and after the floods in 1954 the mill and village at Long Creek were closed. In a sandstone wall on the Palm Forest Walk at Sheep Station Creek are engravings by cedar-getters from the late 1800s.

The area became Border Ranges National Park in 1982 to be managed by the NPWS. In 1986, it was listed as a World Heritage area.

AN ANCIENT AND VIOLENT PAST

Central eastern Australia had moved over one of Earth’s hot spots and for a period of some three million years there were volcanic eruptions, creating much of the landscape of present-day Border Ranges. The volcanic eruptions flowed through the main dome and many side vents, all of which were plugged by cooled lava once the eruptions ended. The cooled lava formed hard, erosion-resistant rock.

Over time, the softer rock surrounding these plugs was worn away, leaving behind the hard rock that can be seen in the distinctive shapes of Mount Lindesay and Mount Glennie.

The eastern half, which is easily accessible to the motorist via the Tweed Range Scenic Drive, encompasses some of the best scenery in the park. The drive is 64 kilometres in length from the park’s entrance tits exit. Because of the steep roads, buses and caravans must be left at Sheep Station Creek Camping Area.

Forest Tops Camping Area is another camping area in the eastern section, situated in a grassy forest clearing.

Brindle Creek Picnic Area is a picnic spot with three trails that explore the primeval rainforest. Red Cedar Loop covers 750 metres of level terrain and takes 30 minutes. Helmholtzia Loop, named for the tall lilies along Brindle Creek, is one kilometre long and takes about 30 minutes and is part of the Brindle Creek Walk, a half-day, five-kilometre walk one way to the Antarctic Beech Picnic Area.

Pinnacle Lookout is reached by a short walk through rainforest. The view from this high point stretches across the caldera to the central plug of Mount Warning and the coast north of Tweed Heads.

Blackbutts Picnic Area situated high on the caldera rim also has panoramic views of the caldera and Mount Warning. Have a picnic surrounded by old blackbutt trees and take in the views of Mount Warning and the Tweed Valley.

Bar Mountain Picnic Area is the highest point on the caldera and is surrounded by a stand of cool temperate rainforest dominated by Antarctic Beech trees. There are three short but interesting walks at this picnic area: Beech Glade Walk (50 metres), Falcorostrum Loop Walk (750 metres) and Bar Mountain Circuit which incorporates part of the Falcorostrum Loop (3.5 kilometres).

Access to the park’s central section is via Lions Road, which provides an alternative route tand from Brisbane. Lion’s Road is reached by turning off the Kyogle-Woodenbong Road 22 kilometres north of Kyogle, thence to Rathdowney, which is on the Mount Lindesay Highway 24 kilometres south-west of Beaudesert.

Border Loop Picnic Area, three kilometres from Queensland, is the only picnic area maintained on Lions Road. From the lookout you can see the famous Border Loop railway. A short loop walk at the picnic area descends into wet sclerophyll forest where different tree species have been given name tags, making this a most informative walk.

The western section of Border Ranges National Park is very rugged and is accessible only on foot. There are no facilities in this section, which is best suited to fit and well-equipped walkers (a map and compass are essential). Walkers should bear in mind that it is very easy to become lost in the rainforest areas.

Forest Tops Rest Area provides overnight camping facilities and an all weather cooking galley. Campers should pack a small gas or fuel stove. Sheep Station Creek Rest Area is near the park boundary and is set amongst eucalyptus. Bush camping is possible on the western edge of the Bar Mountain Rest Area.

The park includes a variety of rainforest types & cool temperate, warm temperate, dry and subtropical & and wet and dry sclerophyll forests and mallee. Buttressed booyong forests, bangalow palms, red cedar trees, brushbox, Antarctic beech (some as old as 2000 years) and giant hoop pines are just some of the diverse vegetation within the park.

Border Ranges National Park’s extensive rainforests contain an abundance of rare and interesting animal life. The NPWS has identified over 170 bird species, many of which are rare and threatened. Some of the resident birds include the paradise riflebird, satin bowerbird and regent bowerbird, green catbird, rufous scrub-bird, Albert’s lyrebird, wompfruit-dove and the rose-crowned fruit-dove. The unusual hip pocket frog can be traced by its call. It hides in the leaf litter, camouflaged by its small size and colouring. While not as numerous as birds, there are many resident mammals in the forests, including the echidna, platypus, spotted-tailed quoll, red-necked pademelon and red-legged pademelon, bandicoots and numerous species of possums, gliders and flying-foxes.

The nearest main centres are Murwillumbah and Kyogle. Border Ranges National Park is 38 kilometres west of Murwillumbah, off the Murwillumbah-Kyogle Road or 36 kilometres north of Kyogle via Wiangaree on the Summerland Way. Access includes some gravel roads.