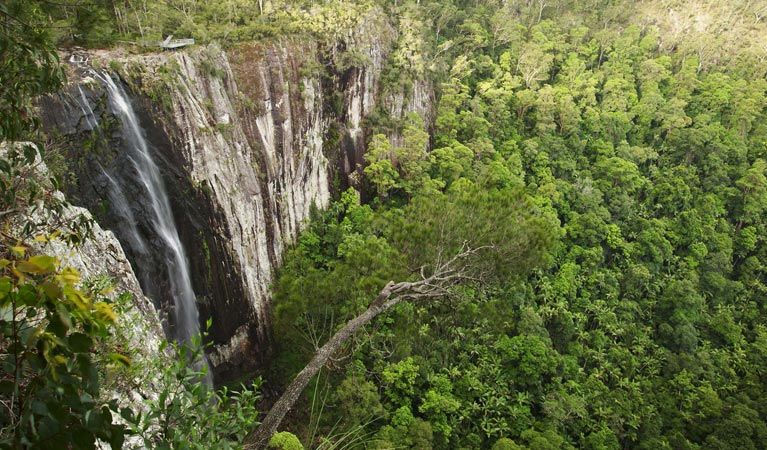 Nightcap National Park is situated in far north-eastern New South Wales between Murwillumbah to the north-east and Lismore to the south. It encompasses 8,145 hectares of the Nightcap Range and adjoins Whian Whian State Forest.

The park is located on the southern rim of the caldera of the Mount Warning shield volcano. Basalt and rhyolite lava flows from the volcano have influenced the vegetation communities in the area.

Warm temperate rainforest is found throughout the park on soils with a rhyolitic base while sub-tropical rainforest is supported by nutrient rich basalt soils. Nightcap National Park has the highest annual rainfall in New South Wales.

The dominant massifs, sheer cliff walls, lush green gullies and spectacular waterfalls which make up Nightcap National Park are relics of its volcanic past.

Fleay’s barred frog and Coxen’s fig-parrot have been recorded in the park but not sighted in the wild for some time.

Spectacular features such as waterfalls play an important part in shaping the natural environment. The precipitous drop of Minyon Falls is the dramatic result of thousands of years of erosion.

Exposed rock pinnacles like the Sphinx are also a product of erosion. The Sphinx, which is visible from Lismore and surrounding areas, is probably the result of wind erosion.

Almost 5,000 hectares of Nightcap National Park was given World Heritage status in 1989 when it was added to the Central Eastern Rainforest Reserves of Australia (CERRA) group.

The subtropical and warm temperate rainforest communities found in the park have links to the ancient supercontinent of Gondwana. The park is one of 50 reserves in north-east NSW and south-east Queensland which make up the CERRA group. All of these reserves contain similar vegetation communities and provide an insight into the past.

Other features include Peates Mountain Lookout and Rummery Park. Please remember the road is shared with other users including walkers, horseriders and cyclists.

Camping is permitted at Rummery Park which is managed by State Forests of NSW. Inquiries can be directed to the Casino office of State Forests on 02 6662 4499.

There are four picnic areas within the park. Al have toilets, picnic tables with shelters and information.

Terania Creek Picnic Area, the scene of historic protests to save the rainforests of NSW from further logging, is located at the end of the Terania Creek Road. The narrow twisting dirt road is 14 kilometres in length, originating in the Channon. Barbecues are not provided and portable stoves must be used for cooking.

Minyon Grass Picnic Area is accessed from Minyon Drive and offers the most spectacular views of Minyon Falls. Barbecues are provided for visitors.

Minyon Falls Picnic Area is situated on Minyon Drive above Minyon Falls. On clear days there are views to the ocean from the waterfall’s edge. Barbecues are provided.

Minyon Loop (7.5 kilometre, 4 1/2 hours, moderate-hard). Beginning at either Minyon Grass or Minyon Falls picnic areas this walk takes visitors through changing vegetation to the base of the falls and along the escarpment edge. For visitors wishing to walk only to the base of Minyon Falls the walk begins at Minyon Grass and is a 4 kilometre return walk taking around 2 hours. Both walks have steep climbs out of the valley floor.

Historic Nightcap Track (16 kilometres one way, 1 1/2 days, moderate-hard). Passing through both Nightcap National Park and Whian Whian State Forest this walk can be started at either Mt Nardi or Rummery Park. The track overlaps parts of the original trail used by travellers and postal workers between Lismore and Murwillumbah in the late 1800s and early 1900s. Bush camping is permitted on this walk but visitors must use portable stoves and carry out their own rubbish.

Protestors Falls (1.4 kilometre return, 45 minutes, easy). This easy walk winds its way through Bangalow palms to the base of the falls. Swimming is not permitted in the area as it is home to the endangered Fleay’s barred frog.

Pholis Gap (4 kilometre return, 1 1/2 hours, moderate). The track was named after Athol Pholi who was killed by a tree fall while working in the area. Beginning at Mt Nardi the track meanders through rainforest for a kilometre before splitting off the Mt Matheson Loop and descending towards the escarpment edge. Drier vegetation dominated by grass trees and New England blackbutt typify the walk to Pholis Gap which offers views of Mt Warning and surrounding valleys.

Goorgana Track (7 kilometres one way, 1 day, hard). This walk requires visitors to be experienced in the use of map and compass. Taking up where the Pholis Gap track finishes, the track skirts westwards along the ridge line, taking in the majority of high points in the Nightcap Range. Remnants of the Kunghur flying fox are found at the end of this walk.

Nightcap National Park can be accessed by five separate public roads from the south of the park. All are dirt with the exception of the access to Mt Nardi.